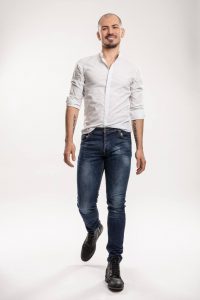 Antonio Pio Fini is First Dancer for the Michael Mao Dance in New York, Special Judge for Milly Carlucci in the tv show Dancing on the Road and Dancing with the Stars on tv channel Rai 1. From 2018 he is Ambassador of Dance as a means of diplomacy for the ACD Agency For Cultural Diplomacy of Vienna (Diplomatic Cultural Agency). He danced for the Martha Graham Dance Company, the Staten Island Ballet, the Mare Nostrum Element and Erick Hawkins Dance of New York. He Choreographed for The New York Opera at Lincoln Center, for the National Ballet of Kosovo, Tirana Dance Festival. Since 2015 he is recognized by the United States of America as a permanent citizen for artistic merits.